NDI IGBO NEWS
March 7, 2020 Tonnison 0 Comments Nnamdi Kanu Set To Lead Million Man Match Over Killing Of Christians - IPOB Reveals
The Indigenous People of Biafra has revealed that Mazi Nnamdi Kanu is set to lead a million-man match over the killing of Christians and other criminal activities in Nigeria. 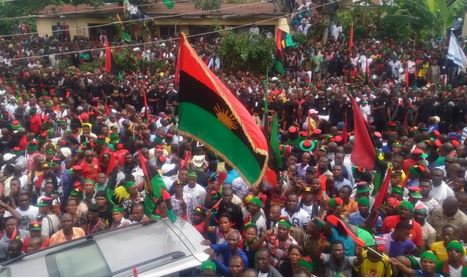 The Indigenous People of Biafra, IPOB, on Friday, disclosed that its leader, Nnamdi Kanu will lead a one-million-man march to protest against the killing of Christians in Nigeria.

The match by Kanu and members of IPOB will take place on the 20th of March in Washington DC, Maryland, and Virginia.

A statement by IPOB’s spokesperson, Emma Powerful said the match was aimed at creating international awareness on the killing of Christians in Nigeria.

The Separatist group also explained that the match would help liberate victims of “neo-colonial subjugation in Nigeria.”

According to the statement: “We the global and indomitable family of the Indigenous Biafra (IPOB) ably led by our great leader Mazi Nnamdi Kanu wish to humbly notify Biafrans, friends of Biafra, persecuted Judeo-Christian communities in Nigeria, victims of Fulani terrorism and state sponsored genocide, including all who are reeling from brutal Fulanisation and genocidal land grabbing tendencies of the vandals from the Sahel aided by the regime in Aso Rock- about the upcoming IPOB One Million Man Match scheduled to hold in Washington DC on 20th of June 2020.

“Our great leader Mazi Nnamdi Kanu and his entourage will lead this march of Biafrans, the forcefully dispossessed, all victims of Fulani religious persecution, the enslaved and oppressed minorities in Northern Nigeria, friends of Biafra and lovers of freedom all over the world on the match towards the liberation of victims of neo-colonial subjugation in Nigeria on that fateful day near Capitol Hill Washington USA.

“We are delighted to announce that we have sought and have been granted relevant permits by the various US state and federal law enforcement agencies in Washington DC, Maryland and Virginia as millions of Biafrans and non-Biafran persecuted Christian communities from across the globe are expected to storm Washington DC for this once in a lifetime march to draw global attention to the unspeakable human misery and rivers of blood flowing throughout Biafraland and Nigeria at large.”

COVID-19: Why Igbos Don’t Die But Continues To Multiply Against All Odds