The Chairman of the Silverbird Group, Ben Murray Bruce on Saturday buried his late beloved wife, Evelyn Murray-Bruce who passed on to the great beyond on the 20th March following a long battle with Cancer.

Life indeed is like a vapor that evaporates with the passing of time, and like a beautiful flower in the morning when beaten by the sun at noon withers away. such was the comments of sympathizers at the funeral of late Evelyn Murray-Bruce.

According to Bruce on his twitter handle, @benmurraybruce said, “We are made from earth, and we return to earth. “ “today, we buried my beautiful wife, and mum to our beautiful children and grandchildren, Evelyn Murray-Bruce”.

They were married for forty-one (41) years, and the union produced four lovely children. 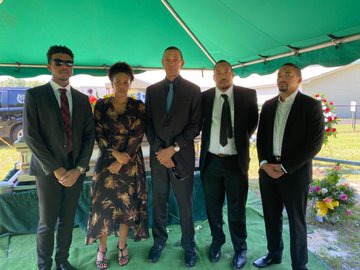 She was buried in a private ceremony in her home town of Valdosta.

The business mogul, Benedict Murray-Bruce, OON is a Nigerian business magnate and politician.

He is the founder of Silverbird Group. A member of the People’s Democratic Party, he was elected to the Senate of Nigeria in March 2015 to represent the Bayelsa East constituency, in Bayelsa State, Nigeria, a position he held until 2019.

May her gentle soul and the souls of the departed rest in peace with the Lord and may the family of the bereaved be comforted.