The Federal Government (FG) has started disbursing the N20,000 Condition Cash Transfer to poor households across the country. The disbursement is said to have started today at the Kwali Area Council in Abuja.

According to the Minister of Humanitarian Affairs, Disaster Management and Social Development, Sadia Umar-Farouk, the Federal Government would be giving out the sum of N20,000 to each person for the next four months as a way of cushioning the effect of the coronavirus pandemic.

The disbursement is part of the Federal Government’s efforts that is aimed at helping “vulnerable” Nigerians get through the lockdown directive given by President Muhammadu Buhari following the spread of the COVID-19 pandemic in the country.

Speaking on the strategy being used to locate and disburse the funds on Channels TV, Umar-Farouk said;

“We have directed immediate cash transfer to the poorest and most vulnerable households in the country. But for the COVID-19, the vulnerable groups have to expand, because we are aware that there are people who live on daily wage, so we are also going to look at those groups of people to see how we can get this food relief intervention to them in this period.”

She further explained that President had said during his broadcast last week that the Conditional Cash Transfer should be given in advance of two months.

Meanwhile, Nigerians have taken to Twitter to react since the President made the announcement that funds would be disbursed to poor and vulnerable households.

Nigerians have wondered what it means to be poor and vulnerable judging by the Government’s yardstick and why the areas where the disbursements would be taken place have not been disclosed.

While some asked if the Federal Government has a database for the poor, others believe the funds should be for every Nigerian and should be disbursed using their bank accounts and BVN numbers.

However, the Presidency announced recently that it has identified 10,695,360 individuals in 35 states across the country as the poorest and most vulnerable Nigerians, during this crisis of COVID19 pandemic. 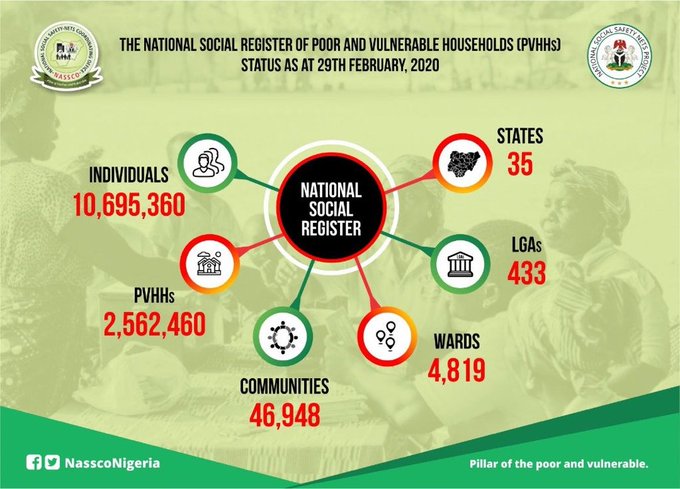 Gods_wheel@ex_hibit
It will also be proper to share your criteria and assumptions for the definition of ‘poor and vulnerable households’.

It would also be best to provide a detailed account of the areas in focus, as it’ll be unfair to think that only the northern part of Nigeria have ‘poor and vulnerable’ households.

I am a rural development expert who has been working with rural poor for more than17 years and I can categorically tell you that you have not captured the poor I know in Northern Nigeria because most of them don’t even have bank accounts!!!!Please don’t get me more upset! https://twitter.com/BashirAhmaad/status/1244726871918612480 …

This is the discussion or debate I have been having with people. What criteria have we used to defined the vulnerables? Does the data capture has the coverage to include all the eligible? Even the social register doesn’t capture the most vulnerables.

Why Buhari Refused To Let Oyo-Ita Go, She Must Continue

Buhari Jets Out To Egypt For Peace And Development Forum

The federal government has disclosed that only five airports would be operational from June 21, while the others remained closed

Tribute To Majek Fashek, He Came, Saw And Conquered (Video)

COVID-19: Why Igbos Don’t Die But Continues To Multiply Against All Odds

Film Anatomie Set to Revolutionize the Entertainment Industry in Africa