Men of the Nigerian Security forces has arrested some of the suspected Armed Bandits terrorising the Southern Kaduna and Katsina states.

The security operatives in a bid to curtail attacks and isolated killings in Southern Kaduna have arrested some bandits and criminals suspected to be members of gangs disturbing the area.

The Sector Commander of Operation Safe Haven in Kafanchan, Colonel David Nwakonobi told newsmen that eight suspects were arrested at different locations with dangerous weapons in their possession during the operation carried out by the task force. 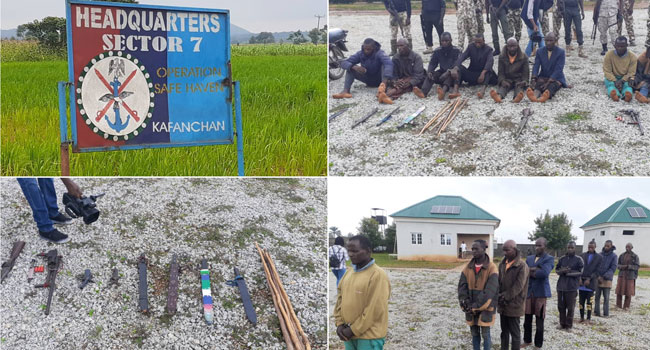 Some of the items recovered from the suspects include locally fabricated pump action guns, locally made pistols, 9 mm ammunition, machetes, and motorcycles.

One of the militiamen involved in the last attack in one of the communities was killed in a shootout and his corpse was discovered in Kibori village during a rescue operation by the troops according to Colonel Nwakonobi.

Bandits in recent times have made Southern Kaduna a very dreary to reside.

Several attacks in various villages across the region have led to many deaths with many others being displaced after fires ignited by the raiders, engulf houses and destroy property.

Perplexed by the situation, the Kaduna State Governor, Nasiru El-Rufai on Tuesday, August 4,  sought support from Traditional Rulers over the recent killings in the southern part of the state.

The governor disclosed in a meeting with Traditional Rulers from the three senatorial zones said there is a need for all hands to be on neck towards bringing lasting peace to the troubled area and other parts of the state.

He also challenged the traditional rulers to fish out criminal elements in their midst.

In solidarity with Kaduna State, the Northern Governors Forum has condemned the attacks in Southern Kaduna, latest of which about 22 persons were reportedly killed after gunmen attacked four Atyap villages in Zangon Kataf Local Government Area (LGA) of Kaduna State.

In a statement, Chairman of the Forum and Governor of Plateau State Simon Bako Lalong said the persistent attacks on villages in the area despite all efforts by the Kaduna State Government and security agencies to end the violence raises serious concern and condemnation.

Lalong said this recent attack where the Atyab villages were affected shows the desperate attempt by criminal elements to not only cause pain and sorrow among innocent citizens but also frustrate the efforts of the Kaduna State Government at fostering peace and harmony. 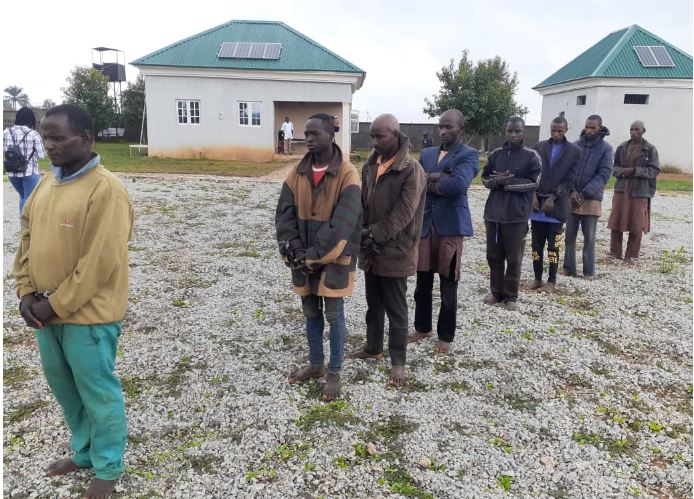 He said “we are deeply saddened by this cycle of violence and blood-letting that is carried out against unarmed and helpless people. This is reprehensible and regrettable. While we call on the security agencies to rise up to the occasion and apprehend these criminals, we also encourage the citizens to assist with relevant intelligence that will lead to the arrest of these bloodthirsty people”.

Governor Lalong also said that the Northern Governors Forum maintains its position that any group or individual that is aggrieved for whatsoever reason should seek redress through official channels than resort to self-help which only exacerbates crises and instability.

The Northern Governors Forum commiserated with the victims of the crisis and the Government of Kaduna State, pledging its support to Governor Nasir El-rufai as he works with all stakeholders to bring the incessant crises to an end.

Members of the public are advised to report any suspicious movements and persons of questionable character when noticed.

Do you know any individual or group sponsoring these bandits? Please lets have your take. you can also share until the authorities do something to curb the manace.