Orode Youths Community Vigilante in Edo state in a joint patrol with some Hausa youths in the community has caught several Fulani herdsmen and bandits kidnapping for Ransome, killing and maiming unsuspecting resident.

The yet to be identified Fulani Herdsmen and Bandits has been arrested by the combined efforts of the community youths and some Hausa residents in the area.

According to Newera News, trouble started when some men of the Orode Community were kidnapped by some Fulani herdsmen, who after collecting 10 million Naira ransom refused to release the victims.

When all efforts to get the men released from the Fulani Bandits proved abortive, the community Vigilante decided to comb the entire bush.

Before venturing into the forest, native insurance was administered to the youths on the mission to rescue their kinsmen and women kidnapped by these Fulani herdsmen.

Within a few hours of comprehensive search, the bandit’s hideout was discovered and immediately without wasting time rounded up by the vigilante group.

The bandits had tried to escape but were overpowered and arrested by the Vigilante group and taken to the palace of the village head for further questioning and investigation after which they will be handed to the Police for more intervention. 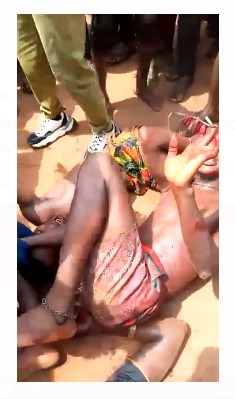 The Edo Youths has risen to the occasion of protecting themselves since the police and other security agencies cannot protect them. What do you think?

Ruiz Blames Three Month Partying For His Loss Against Joshua