The 62-year-old security man simply identified as Mike Okeke has been arrested for allegedly raping an underage physically challenged student of Basden Memorial Special School of the “Deaf and Dumb” located in Isulo, Orumba South LGA of Anambra State, Nigeria.

Newera News gathered that Mr. Okeke was arrested following an outcry by some students and staff of the institution.

According to a statement issued by Human Rights Defenders (HURIDE) on Wednesday, November 24, the suspect had been accused of raping physically challenged students of the institution in the past.

Just recently, he was accused of sexually molesting the students of Basden Memorial Special School of the “Deaf and Dumb” located in Isulo, Orumba South LGA.

A source told the group that the suspect was allegedly caught in the act defiling a 12-year-old deaf and dumb girl in an uncompleted building within the school premises last Friday, November 19.

“A 62yr old Mr Mike Okeke, is reported to have been in the habit of defiling, raping and impregnating underage deaf students of Basden Memorial Special School of the “Deaf and Dumb” located in Isulo, Orumba South LGA of Anambra State, Nigeria. The suspected randy Mike is a senior staff member of the school

Report from a reliable source told Human Rights Defenders (HURIDE) that Mr Mike had in the recent past impregnated two teenage deaf and dumb students of the school. But because the overall Head of the school, Mrs Ebere Ichoku has allegedly been sweeping the matter under the carpet, Mr Mike always has the temerity to unrepentantly return to such an ugly act.

For instance, just on Friday 17th November 2021,Mr Mike was caught red handed in the act again around 12 midnight as he was defiling/raping a helpless 12yr old primary 3 deaf student.

The source who pleaded anonymity told HURIDE; “on that Friday night, Mike had successfully lured the 12 year old deaf student out of her dormitory into an uncompleted building in the school, tore her clothes/pants and began to defile/rape her.

“Her hostel mates were searching for the missing girl everywhere in the school and finally got Mike on top of her in an uncompleted school building. The utterly bewildered students quickly and quietly alerted some teachers of the school who were already asleep.

“They followed the students to the uncompleted building where they saw Mr Mike still busy dancing on top of the little girl child even as she struggled unsuccessfully to get herself off Mr Mike.

Immediately the teachers finally rescued her, she collapsed and almost give up the ghost amidst heavy blood flow from her vagina.

“It took serious medical efforts to stop the blood flow and resuscitate the girl.

Right now, she cannot walk because all her body is open. It is a painful thing seeing how these defenseless and handicapped students are being abused in this school by these soulless humans under the watch of Mrs Ebere Ichoku, the school head who is already at it again trying to help Mike evade justice as usual” the source added.

Meanwhile, the Head of the School Mrs Ebere Ichoku confirmed the incidence but denied complicity. She told HURIDE on phone that the randy Mike has been arrested by the Isulo Vigilante group, adding that the school authority has reported the matter to the Anambra State ministry of Education.

HURIDE has however contacted the President General of Isulo Town, Mr Sam Kennedy who confirmed the arrest of the suspect who is still in the custody of the Vigilante group under his supervision.

He however, complained that there’s no functional police station to hand over the suspect stating that all police stations around Orumba South LGA of the state are not accepting or keeping suspects owing to fear of the incessant attacks by the Unknown GunMen.

Therefore, HURIDE is creating a synergy with FIDA through her Anambra state focal person, Prof Ogugua Ikpeze towards taking over the matter to ensure the right thing done for the safety of the challenged children. 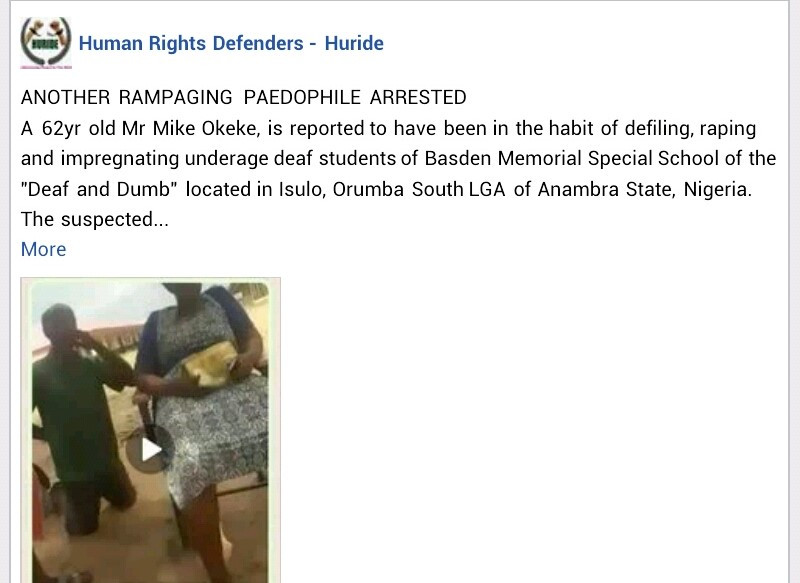 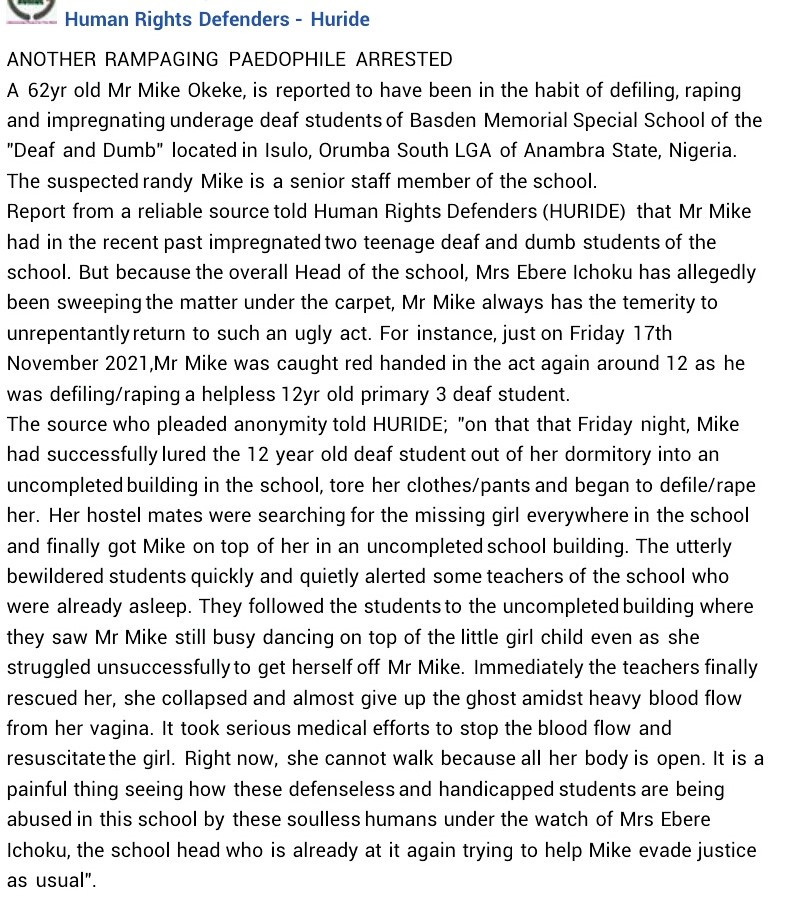 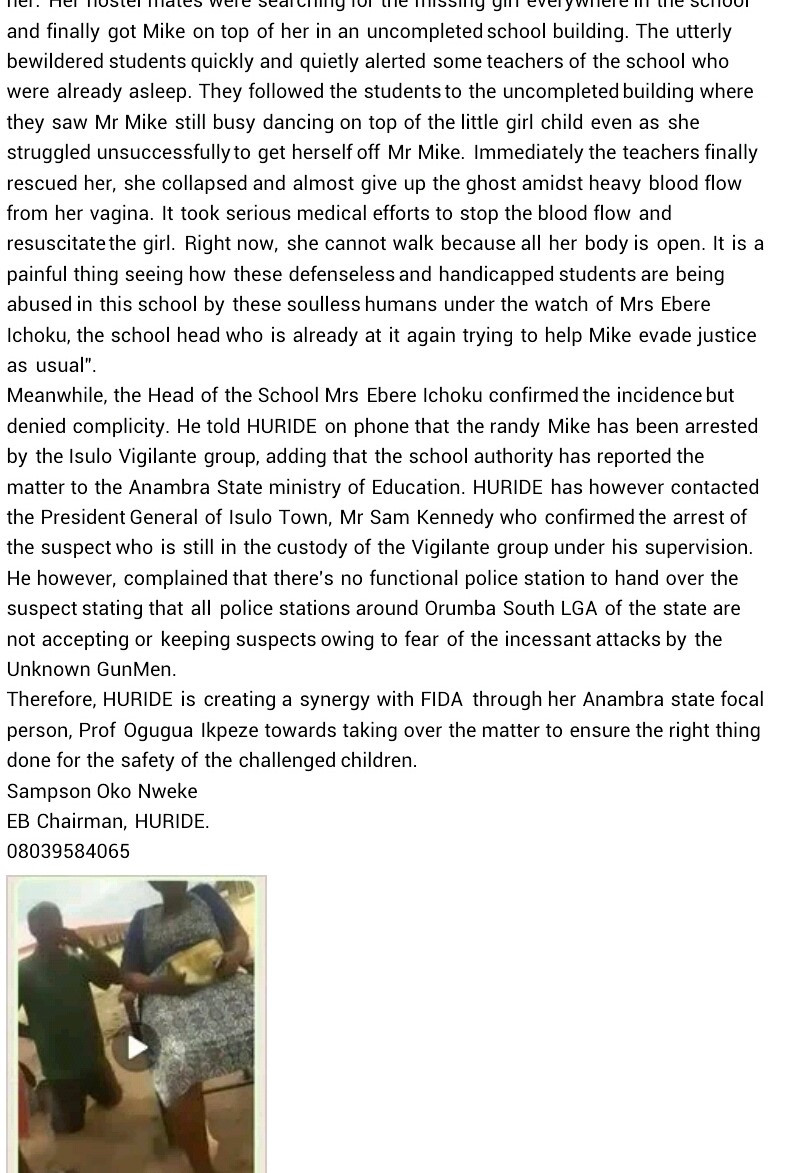 Following the arrest of a security man attached to Basden memorial special center, Isulo, Orumba South, Anambra State, Members of the public are advised to watchout and report any one in the habit of defiling minors in school or around the homes.
Please help give justice to the defenseless handicapped students that are being abused by these wicked individuals in the society.
Let this message go viral, till it gets to the appropriate people in Authority and justice despenced.